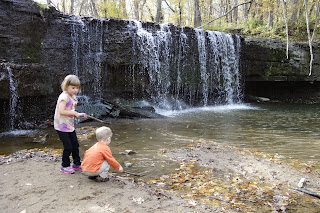 Thisbe came home from the park barefoot and skirted and wearing a leaf crown another mother had made for her.  At rest time she practiced writing numbers, the middle of the page filled with scribbled black circles that looked like mistakes but that she said were "breathing places."

We spent the afternoon in a friend's backyard, drinking cider and beer and Manhattans, eating chili and pita chips and Halloween-themed Oreos.  You guys painted pumpkins on an old shower curtain and drew with chalk on a wooden fence and tried to steal the football that the grown-ups spun through the 85 degree air.  The grass was short and green and the bugs were gone and sometimes, in the middle of talking, there was the extra weight of a leaf falling onto a shoulder or arm or leg.  Matteus, you pushed the bubble lawn mower and drank cup after cup of cider.  Your sister swung back and forth across the monkey bars so many times that in the evening as we read stories she peeled white, calloused skin from her palms. 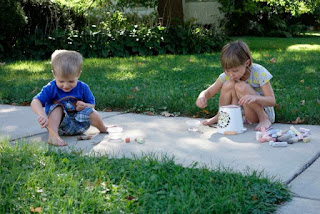 The first weeks of school for your dear darling sister have been a bit of a shit show.  She got in trouble for hugging when others didn't want to be hugged, for hugging in the middle of lunch when she was supposed to be focused on her peanut butter and jelly, for hugging on the classroom carpet in a way that looked a lot like wrestling.  She came home sobbing, saying that no one wanted to sit next to her on the bus.  She cried because we told her she couldn't wear her silver shoes to school, she screamed because we wouldn't let her wear a short-sleeved dress in the cold, she raged because I corrected her when she read the wrong word in her book in a bag, she shrieked "you don't love me, no one loves me, no one will ever love me" when we told her she couldn't leave for the kindergarten dinner until she used the potty.  No accidents at school but accidents at home as though, at a very physical level, after holding it in all day, she has to let it out as soon as she gets home.  So it has rained down on us: urine and snot and tears.  It rained a lot in our house this September.

October seems to be better.  It turns out your sister needs time in her room, alone, each and every day.  She needs to play school so that she can have a chance to be the teacher.  She needs to order imagined students to sit on the buttons printed on her carpet, she needs to cut scraps of paper and distribute them to willing imagined participants.  She need to chasten others.  She needs to curl up with Grimm's Fairy Tales, a book without pictures that she cannot read, and she needs to read that book, to tell those invented stories until she reaches a place of equilibrium again. 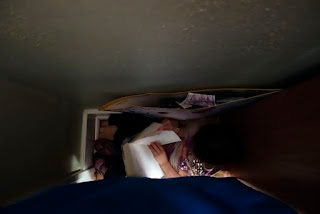 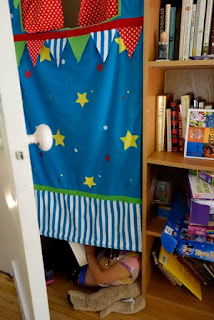 On the other hand, you are a fairly stalwart example of equilibrium unless your sister is behaving in which case you start to whine and writhe around on the ground.  You want your shoes on but you do not want us to help you but now you do.  You are done with your yogurt but holy shit how could we possibly have taken your yogurt away from you???  You want three blankets tucked around you at every nap time.  You want Snow White read at least five times per day.  You want to do everything that Thisbe does and sometimes your exact mirroring of her actions is hilariously sweet.  Until it's not.  Then you're both spraying mashed potatoes at dinner and Daddy and I are yelling and you're both laughing in reflected tones of crazy. 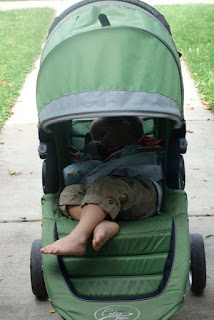 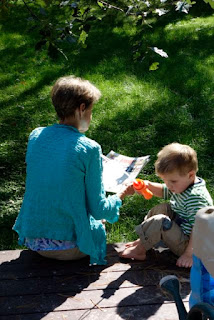 Fall is my favorite season and also the season in which inexplicable sadness most often rears its head inside me.  Perhaps because fall always feels like a time of accounting--for what has been lost, for what has failed to grow or thrive or come into being and also for what we have, for what has been given and offered and shared.  Fall is the place from which winter is visible in the distance, even as the foreground blazes with bounty.

On Saturday we went walking in the woods.  You and your sister poked soggy leaves with sticks, clamored up rocks beside a waterfall, examined mushrooms and discarded sunflower seeds, acorns and insect eggs.  We ate apples on a bench and wiped snot from your nose, argued over water bottles and doled out jellybeans when the whining commenced.  You rode on my back.  Sometimes, your sister took your father's hand.  Sometimes the two of you showed each other the way. 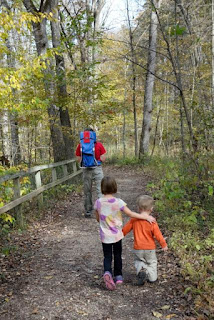