It's August and you, Matteus Mark, are two years old.

It's August and here in Northfield the humidity has cleared and the blue skies are shimmied with puffy streaks of white.  Flower boxes are overflowing and bikers stand outside Blue Monday, wiping dust from their spandex shorts and blowing cool air over the tops of their coffee cups.  You're home with a babysitter, probably cooking cupcakes in the play kitchen or watching the diggers tear up Second street or taking Baby Tay for a ride in the doll-sized stroller. 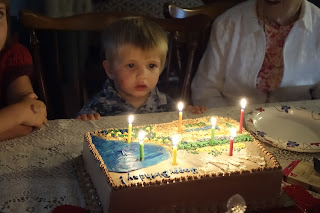 You speak in four or five word sentences.  "What happened in this book?" "Mama sit right here." "Thisbe wake up now." "Pushing Baby in stroller." "Raisins in oatmeal please."  You like present participles, everything happening right now and continuously: sitting, standing, sleeping, eating.

The dim scabs of bug bites decorate your arms and legs, your right cheek, the back of your neck, the bridge of your nose.  You like to cuddle and tickle.  You are ridiculously sweet. 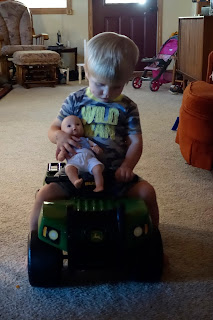 Thisbe is dressed in green today (actually turquoise that she adamantly swears is green) for her second day of Vacation Bible School.  The theme is G-Force and the hallways of Bethel are decorated with orange cones and rolls of black paper dotted with white lines.  A cheetah puppet talks to the children about God while they roll on the floor or sit slack jawed, staring.  Thisbe's learned half of one song (something about "small as a bug" and "tall as a tree").  On the first day she made a shrinky-dink in the shape of a shoe, "helped everyone remember that story about Moses in the basket" and made a "real tornado!" inside two water bottles held together with glitter tape.  For snack, there were white chocolate chips and M and M's.  She's in heaven.

You demand to read a book filled with fire trucks but empty of plot at least 73 times each day.  You subsist mainly on yogurt and fruit and oatmeal and eggs and noodles and bread and peanut butter and rice.  On Mondays we go to the farm and choose eggplants and peppers and bushy stalks of kale.  We clip the flowers that don't have bees nesting inside them and we're thankful to see the bees nesting anywhere at all.

What we know about fire in a forest is that most of the time it's part of a cycle that's good and necessary.  It's the way nature needs to behave in order to be healthy.  But it's also true that global warming has caused higher than normal temperatures, has sucked the water from much of the west coast this summer.  This fire's blossoming spread may have more to do with the harm we've caused the earth than the earth cyclical ability to rejuvenate itself.  But the truth is that whatever caused or prolonged the fire, Railroad Creek Valley was going to burn eventually. 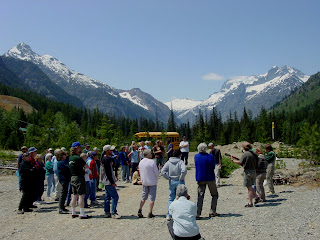 But there is a village in Railroad Creek and that village is the spiritual center of my life.  I learned to become myself in that village.  That village has transformed and sustained thousands of people over the years.  All of us are different for having passed through that place.


I am, you are, part of a community that believes death never has the final word.  We believe in resurrection.  And we believe good care of the planet is part of our job and our responsibility.  But on the other side of that village burning are so many unknowns: whether we would be allowed to rebuild, whether there would be enough money to rebuild, whether people would care enough to make that happen.  And even if rebuilding occurred, there would be many long years of absence and charred remains.  The truth is that for all our preaching and belief otherwise, to face the death of some one or some place you love is terrible and terrifying.

So, like you Matteus, we occupy the present participles that pull us through these hours and days, that make time a river instead of a past or a future.  Railroad Creek is still running.  And we are waiting and hoping and praying...for the village to be saved, yes, but also for the good courage to face that possible death and the faith to believe in the new life that exists on the other side. 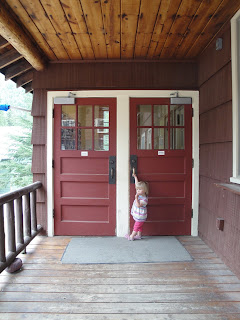